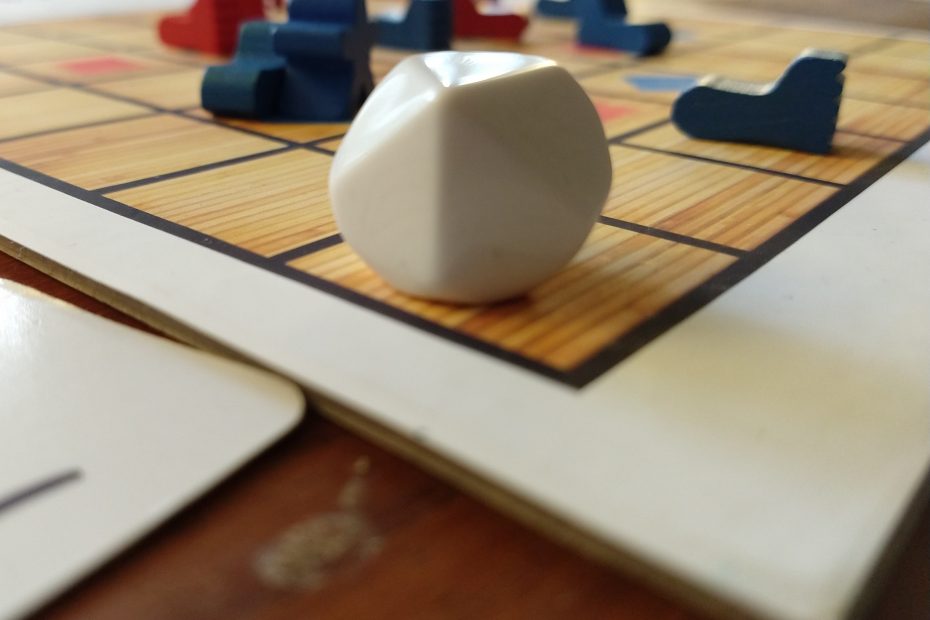 In the last design diary post, Tom talked about how he went from idea to prototype for our first board game. This post covers playtesting of the game – showing it to friends, other designers and the public.

The first playtest was with my friend Becca who had sparked the idea. She was immediately taken with it, enjoying the apparent simplicity becoming surprisingly confusing as the ship movement changes from round to round. Although caution needs to be applied to friend’s opinions, I was really happy that it wasn’t just me being blind to my own design failures.

We played the game a dozen or so times over the following week or two, trying some different board sizes to try to find the right amount of space on the board – too small meant that the deckchairs couldn’t be moved around, to big and there was too much space, too easy to knock your opponents pieces out of the way and too hard to recover. The ice block was too powerful as it would just kick pieces to the edge. Pieces would bunch up around the edges as a result and the game play would get stuck as players couldn’t do anything much. Having scoring tiles on the edges was an advantage and it wasn’t much fun to get those pieces into place and hold them there.

The first playboard we used

At the same time, I tested the game with other friends. One big change suggested by Dan (who also designs games for Silver Birch Games) was to change the playboard so it shows the scoring positions directly on the playboard.

The first playboards didn’t have scoring squares marked, instead you threw out cubes onto another board and then cross referenced between the two.

Placing the squares directly on the playboard made gameplay a lot quicker and easier, and eliminated mistakes made by players getting the wrong square when looking between the two boards. This was at the cost of variability as now we need to have fixed playboards but is one of the best changes that came from showing the game to other people.

I didn’t keep a log of playtests in this first phase of playtesting. The game is still very fluid and often we’d play half a game, then change a rule and start again. I would like to be able to tell you how many games were played between the 6 of us that initially tested this game but I don’t actually know. Including part games, we must have been into the low hundreds of play throughs before settling on the final board size and ice block rules.

I also sent the game over to my brother who lives in New Orleans. He played this with friends of his, allowing me to partly blind test the game at an early stage. I got him to film one of his games so I could see that they were playing right and got a lot of really good feedback on the rules as they were written, and got lots of ambiguity out of the rules at this stage. I’d highly recommend sending a game to be blind tested by friends – but beware of the feedback of the game itself, as they are still friends, and you need to hear what strangers think of it still.

From my brother came two really important pieces of feedback. Firstly, his friends had expected a really stupid/silly game from the game title, when actually what we have is a themed abstract. It’s a great puzzleish area control abstract, but it’s quite dry for a game themed on something so stupid. This has been important to us to incorporate into our marketing to try to be clear with people what to expect from this game once released.
The second piece of feedback was with pieces bunching up around the edges, and how frustrating this is.

At this point we were playing on a 5×5 grid with scoring points all over the board. To manage the edge bunching issue, I added an extra layer of squares to make a 7×7 board but with no scoring points on the outer ring.
This incentivised players to keep pieces away from the edge, but the ice block was again too powerful as it would kick pieces to the edge, so we played around with some different rules to reduce the power of the ice block, settling on on our current rules as a nice balance between power and weakness, and especially because the power of the ice block is contextual – get it on an edge with a bit of a run to the first deckchair and you can really destroy your opponent’s plans, but when it’s right next to a deckchair, it’s often not a valuable move.

After a couple of months of private playtesting with friends, and into the hundreds of playthroughs, I reached version 3 of the rules and felt ready to take this out for public playtesting, which you can read about in part 3 of the design diary series, which will be published in two weeks.

2 thoughts on “Deckchairs On The Titanic Design Diary 2: Private Playtesting”